Bangladesh to Silicon Valley: What It Takes by Mizanur Rahman & Anam Ahmed 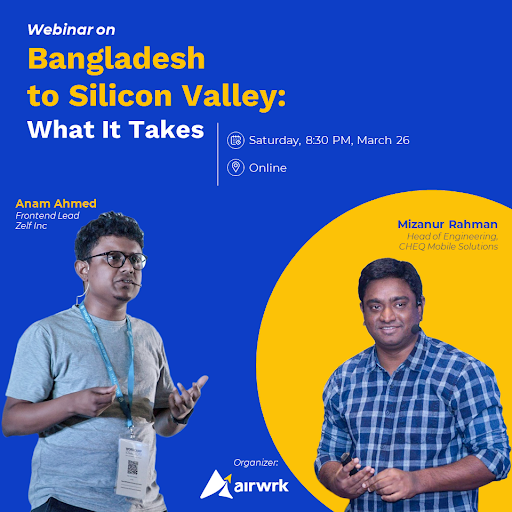 Mizanur Rahman started his career in 2003 with a local company Tiger IT. He joined a full-time remote job i2i. From that time he became a fan of remote jobs and has worked with US companies and EU companies. Currently, he is in a Seattle startup currently building a team of Bangladeshi workers of 50-60 people. On the other hand, Anam Ahmed started this industry 10 years ago two years into uni. He started with a company based in the USA and then joined a fin-based company called Codenet. He also worked for Telenor health and then for a full-time remote job. Currently, he’s in Zelf. Mizan and Anam walk us through the upskilling steps to take Bangladesh to Silicon Valley.

Mizanur thinks that when you are working with an international team the most obvious thing the people like about Bangladesh are the talents and the technical skills. He believes that we are really good at problem-solving. He says, “So just to give an example we decided to start some new projects in Bangladesh. The output was so amazing that the management was like okay this is the right time to invest in Bangladesh and get more people. From a 2-member team, now we are a 20 + people team.” He also thinks that we have similar technical capabilities to Eastern European compared to other markets in Southeast Asia and Ukraine. Once lots of Telenor health talent moved out of Bangladesh to Germany, Singapore, etc. They are being appreciated there as well for their technical skill. We should take this forward in our journey to take Bangladesh to Silicon Valley.

According to Mizanur, software development is not only about writing code. Rather it’s about being a team player and communicating with the team, with stakeholders, and taking some accountability and responsibilities. That is the biggest challenge he has seen. People can code but they are really bad at communication. Bangladeshi people usually don’t talk in English in an office environment so it’s a bit challenging when you are jumping to a remote environment. One of the challenges Mizanur has noticed is the lack of mindset. Startups require a different mindset than working with an enterprise company. Unlike Google or Microsoft, the way of working is different in Netflix or Zelf. What you want is some sort of accountability, for example, if the server is down, you cannot say that you take a day off. Although nobody forces you to work overtime, we should know how to overcome that part.

Thus, communication is something to be worked on. The journey of Bangladesh to Silicon Valley does not fall short anywhere in skill but we have to be more used to working across borders and working the people from other cultures and be able to speak in English.

Anam says that the time zone difference is a challenge, sometimes you have to work in the day, sometimes at night, and at least two to three hours of overlapping takes place. You have to communicate in different modes when switching from a bigger organization to a small startup. What you will realize is it dramatically increases your responsibilities. Anam says, ”In Telenor health, there used to be dedicated teams for quality assurance, for support but now we have to write our own app you have to do your own quality assurance own  writing testing repeatedly

Anam considers communication a crucial aspect when taking interviews. He thinks that talent is everywhere but when he asks a senior front-end engineer, they are excellent coders, their Github profiles are too good but they don’t know how to communicate. Even when he asked them questions in Bangla for their comfort they could not communicate. So we have enough skills but we have to take communication into account.

Tips for Self Development

Again Mizanur loves to see more self-managed people. For him, it was a challenge being a person coming from Bangla medium school in North South University. He took his own initiative as he didn’t speak fluent English. At that time he used to have problems expressing himself. Mizanur says, “As long as you can express your feeling, you don’t necessarily have to be grammatically correct . Even if you cannot speak English, make sure you write properly so that you can chat with the team. Self comes to start with your personal life. Technology will grow as you grow. At present React.js is popular but it also might become obsolete in near future.”

When it comes to personal branding, Anam considers himself an introvert. If you want to do personal branding for a developer, nothing is more important than open source than GitHub or writing blogs. Good developers always learn new things and new solutions to a new problem. You should write about it on a blog. Many of Anam’s job offers were from Github. They got his mail from Github. They said that Anam doesn’t need an interview as they saw his code. So if you are introverted just keep writing codes and keep a track of the source.

It’s very possible for freshers even with 1-2 years of experience to land a remote job as well. For sure you need to be good and focus on open source projects, hacking and competitive programming, and building a good GitHub profile. In CVs,  typical university projects like a Library management system or attendance management system don’t differentiate you because thousands of people are doing the same thing.

Is competitive programming a must?

Not necessarily but it helps you become a better problem solver and enables you to have the problem-solving mentality. Competitors know well how to approach a problem in a limited time. Whereas you won’t ever solve such complex coding problems in real-life job scenarios.

airwrk bangladesh coding competitions coding jobs dual remote job how to make a resume job interview mizanur rahman Overemployment remote career remote job remote jobs resume silicon valley tech job tech job interview work from home zelf
We use cookies on our website to give you the most relevant experience by remembering your preferences and repeat visits. By clicking “Accept”, you consent to the use of ALL the cookies.
Do not sell my personal information.
Cookie SettingsAccept
Manage consent

This website uses cookies to improve your experience while you navigate through the website. Out of these, the cookies that are categorized as necessary are stored on your browser as they are essential for the working of basic functionalities of the website. We also use third-party cookies that help us analyze and understand how you use this website. These cookies will be stored in your browser only with your consent. You also have the option to opt-out of these cookies. But opting out of some of these cookies may affect your browsing experience.
Necessary Always Enabled
Necessary cookies are absolutely essential for the website to function properly. These cookies ensure basic functionalities and security features of the website, anonymously.
SAVE & ACCEPT